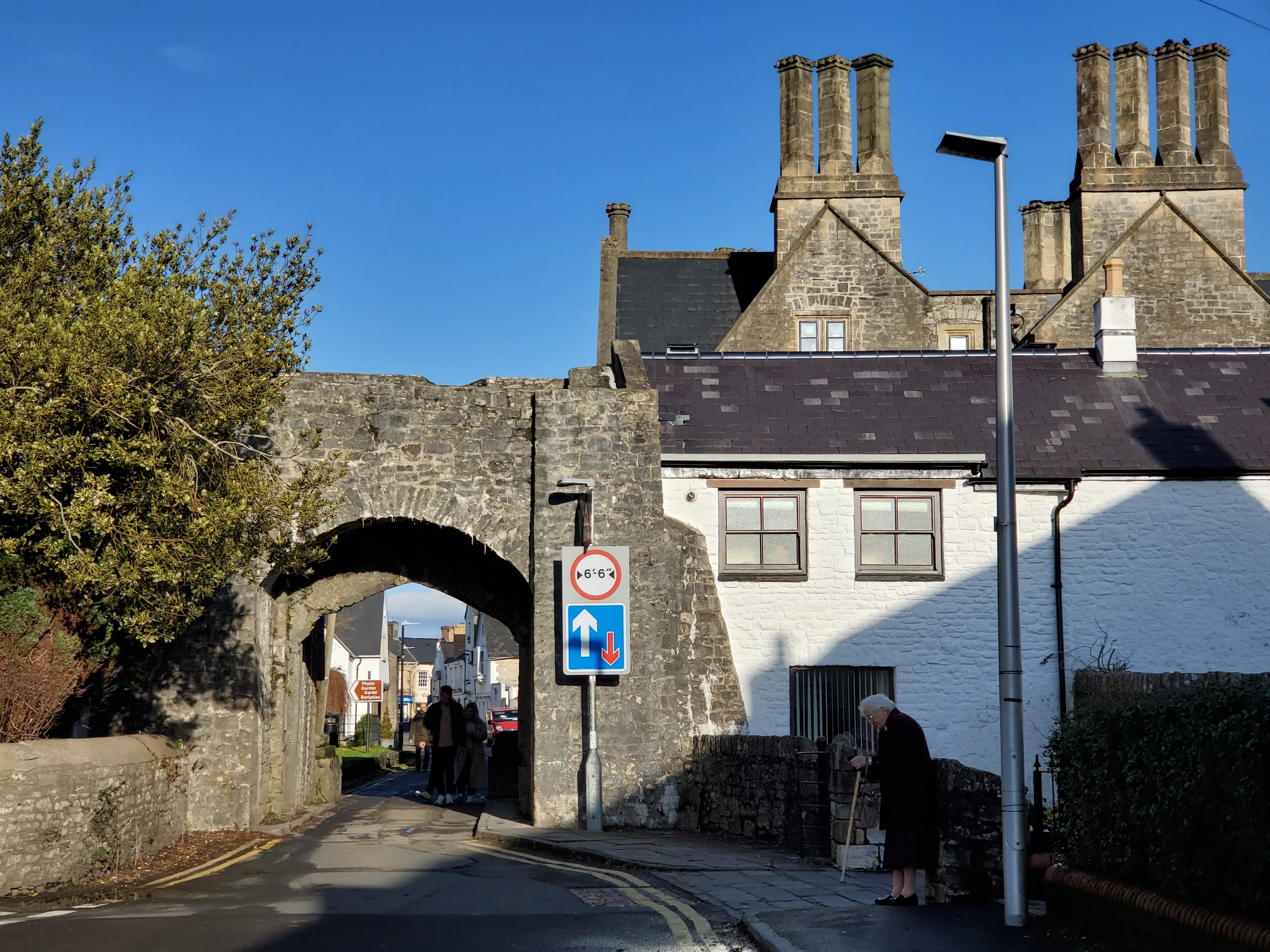 I visited the UK, primarily to meet family and experience the place of (some of) my ancestors. I did also manage to delve into some renewable energy topics a little (more on that in another post). Perhaps like many Canadians, I don’t have much connection with my roots. As far as I know, my ancestry is exclusively European. But most of my predecessors go back many generations in North America (including one who was among the “Filles du Roi”, orphans who were sent to New France in the 1500s as brides for the settlers) and most of their specific ties to Europe have been obscured by the passage of time.

One exception is my dad’s mother, who was born in Wales. Her sister’s sons (my dad’s cousins) still live near Cardiff, and so I travelled to Cowbridge in SW Wales.

Upon arriving in London Gatwick airport from Reykjavik, I unloaded my foldie, discarded the cardboard box, strapped my backpack to it, and pushed off into the night, to find my guest house about 1km from the airport. The fresh air and self propelled movement  was refreshing and the bike handled pretty well with a heavy load. My elation was quickly damped down with the challenge of navigating the airport traffic circles going the opposite way, with no sidewalks or bike paths in sight (don’t worry, family members, I had lights!). But once I found the right roads (thank you, Google maps and sim card), I had no trouble finding and checking myself in to a tidy and nicely kept early 1900s flat.

The next day I took the train to Cardiff and got my first view of English countryside on a beautiful sunny day. Rolling hills, hedgerows, stately oaks in green fields, muted orange and gold Fall foliage, and the occasional medieval manor flashed by. My luggage management system consisted of folding up the bike and popping it into a duffle bag to load on the train, and then taking it out and rolling it (in folded mode) the short distances to transfer trains. So far, so good.

Richard met me at the station in Cardiff. It’s a bit of an odd feeling meeting a relative for the first time. I won’t share too much as he likes to keep a low profile. I’ll just say he is gregarious, mischievous, open-hearted and as prone to engaging everyone he meets in spirited conversation as my dad. His penchant for lengthy (yet engaging) speech and befriending every puppy dog we met also reminded me of my friend Patrick L. Also, he was a welcoming and generous host, introducing me to the townsfolk and landmarks, and sharing his varied musical collection, even if we never did find the house where my granny lived. I also enjoyed meeting his brothers, Hugh and Chris, over a meal and coffee in Cowbridge.

Where I come from, “heritage” buildings are 50 to 100 years old, so it was pretty “bonkers” to visit churches, restaurants and shops in buildings dating from as early as the 1400s. The oldest structure I discovered was a portion of a castle built in the 12th century (unfortunately only partially standing now, only much use for selfies by tourists and apparently a local dog run). I can’t imagine what the carpenters of olde would think of my home, an apartment built in the 1980s that’s pretty much at the end of its life.

One day, I took my bike out for a tour in the Vale of Glamorgan, south of Cowbridge. The phrase “over hill and dale” kept coming to my mind, and I admit the four gears of the foldie were a little deficient in getting me up the steeper ones (nothing to do with my fitness of course). The small roads were about 3 to 4 metres across, tightly hemmed by well trimmed, dense hedgerows, with very occasional and almost imperceptibly wider sections – I can’t call them pull-outs – that allow vehicles to pass one another, often requiring one to reverse some 50 metres, in exchange for a politely raised hand. On a bike the passing procedure was a bit easier although occasionally startling, and otherwise quite pleasant, and as indicated by a high incidence of MAMIL sightings, these roads are popular cycling tracks. The main highway roads, on the other hand, are decidedly not bike-friendly, with no shoulder, requiring cars to pass me in the oncoming traffic lane. Luckily I only had a few km of that until I found another small track to take me back to town. On my way back I found a “cute” manor house for sale and tried to imagine living there among the 500 year old ghosts, with fires burning in every room to keep the chilly winter air on the other side of the stone walls.

Richard took me to see some remnant “ancient woodlands” cresting some of the hills. There were indeed a lot of large oak trees among them. Somehow, it gives me a sense of familiarity to recognize the plant life, like running into old friends in a foreign land. In addition to the oaks, I could pick out nettle, hazelnut, bracken, poplars, and ivy, although it was hard to identify other deciduous trees that had shed their leaves. I was kind of surprised to see a lot of ivy choking the trees, just like back home where it’s invasive. I always thought it would be kept in balance somehow in its native ecosystem, but it appeared to be running rampant.

I also puzzled, how do you put ecological restoration in context in a landscape that’s been intensively managed for thousands of years? Of course, there’s the logistical challenge of finding the space, while still growing and producing food and materials for example. But also, how do you even define what is “natural”, as a reference of what to restore to? Whatever it is, it seems clear that it won’t be possible to bring back the pre-agricultural or pre-human past. In theory I imagine first, maximizing efficient use of land while mimicking natural systems (for example, using rain-gardens instead of piping water runoff), and strategically “re-wilding” where possible. I’ve worked in this area in the North American urban context, but I was seeing it from a somewhat different angle here.

We later drove to the mouth of the Ogmore River, at Ogmore-by-the-sea, surrounded by sand dunes and, according to a group of yellow-vested geology students, fossils among the eroding mud banks. It’s a lovely spot but it was blowing a gale and about to start pouring, so we retreated to the Pelican in Her Piety, an 18th century-built roadside pub. Richard is unimpressed with old “piles of rock” that can be found everywhere around here, but he obliged my curiosity by trudging through a sheep field with me to visit one more castle.

Anyway, it’s hard to say if I felt a spiritual/emotional connection with this land. I guess I did feel some groundedness, knowing that I can trace at least one branch of my family back to almost 1000 years of residing in this place. But what does that even mean? There are so many branches, the one you choose to follow seems kind of arbitrary, and if you go back far enough we’re all related. Do I have any more “right” to be here than anyone else? What happened to the original people of this land (the Celts, I guess, or whoever came before them), and do I have any connection to them? What was my family’s role in their displacement (or worse), and what if any responsibly do I have to atone for their wrongs? I doubt anyone has a sinless ancestry. So I guess ultimately we are responsible for what happens today – much of which was set in motion long before. If nothing else, looking back can be useful as a reminder that the choices we make today will influence future generations, whether our kinship is by bloodlines or simply our shared humanity.

After several days in Cowbridge and an afternoon in Cardiff, I made plans to carry on to Amsterdam. It may seem strange to skip London entirely, but I didn’t feel a particular call to go there, and I’m not here to just check boxes. (What I AM here for is an open question.) Another time, I’d like to make it to other parts of the UK, including Ireland, where I have ancestry on my mum’s side, but no living relatives and fewer clues to where they lived and what they did.